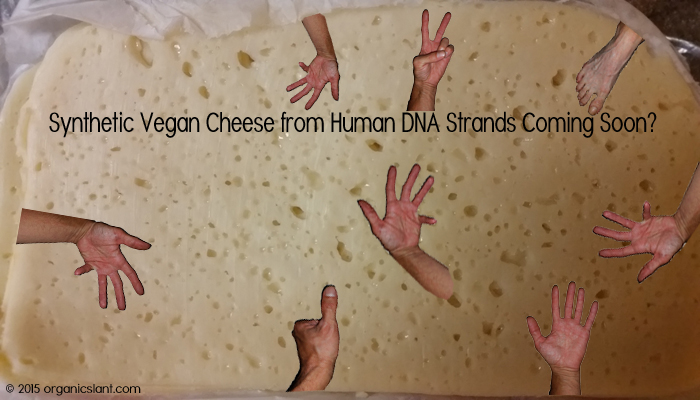 A San Francisco based, synthetic biohacker group has made hundreds of headlines for creating cheese without the use of cows. Young biohackerspace people from BioCurious and CounterCultureLabs make up the group.

They beat out 243 other groups to take first place at this year’s iGEM “jamboree” competition. iGEM stands for international genetically engineered machine. The winner’s group fundraiser brought nearly $40,000 from donors – over double the amount they needed. They claim to have approval from many vegans, without the anticipated anti-GMO backlash.

Interestingly, they have dubbed the product ‘Real Vegan Cheese’ because they claim that other vegan cheese-like foods are merely substitutes.

Genetically engineered bakers yeast is inserted with DNA strands, some of them human – to cut down on allergies they said – to make the yeast into a “milk” protein creating factory. But no actual mammal DNA is used. The yeast stays behind for the end product. They say: “To create our proteins, we study animal genomes, choose milk-protein genetic sequences, and synthesize those genes.”

Plus the purified proteins will be identical to those found in regular cheese, and will not contain any GMO!

The New Yorker explains what synthetic biohackers are about and how they differentiate themselves from other genetic engineers:

At the core of the Jamboree was a discipline called synthetic biology. Whereas developers of genetically modified organisms—herbicide-resistant soybeans, carotene-enriched rice, faster-growing salmon—tweak a plant or an animal’s DNA with genes borrowed from elsewhere in nature, synthetic biologists assemble new gene sequences from scratch. The science has attracted a good deal less press than G.M.O.s, but it has already moved beyond the lab. [emphasis added]

iGEM wants to foster undergraduates into applying systematic biotech, using engineering and biological parts to operate in living cells. An alchemy of sorts.

The group says they are independent, open source, non-profit and base their actions off of a love for the environment. They disarm public scrutiny by inviting questions, even critical ones, and attempting to foster transparency. They claim they don’t want to change the conversation on synthetic biology, but rather take an inviting approach and quell fears of safety aimed at their project. The invitation for people to get involved is offered to replace the question of should scientists and companies be allowed to do “X”? In other words, the acceptance of synthetic biology will happen as a result of public participation and engagement.

During their iGEM presentation, they were asked about the legitimacy of doing something just because we can, as they stated. The man asked them to reframe the idea and say if you should. While not as vague as responding “why not?” they reiterated a love for the environment, animal rights, encouraging a plant-based diet and teaching the public. Perhaps the gentleman asking meant – why this? Is there not a better way to solve the inconvenience of vegan fare and the environment aside from synthetic biology, i.e. using the human genome?

As for other safety concerns, they disregarded any claims to casein protein, or, their casein micelles being a precursor to cancer.

This is not the first project to create a food, or a sort-of human-based food under the auspices of “sustainability.” There are Bill Gates’ vegan, plant-based eggs. Genetically engineered cows that produce human breast milk (I guess cows are still useful for something). Test tube meat. Do you see a pattern? For starters, it’s the idea that the naturally-born counterparts are inherently “bad” and that we should get used to a world without them.

While they claim it’s not an actual GMO with no DNA or GE ingredients remaining, some people find it unsettling to eat human protein-derived food products. Comparisons to the “zombie” craze and Soylent Green are surfacing. The zombie trend has prompted restaurants to try for burgers made to taste and feel like human flesh – sort of the inverse of using the actual human DNA blueprint to create cheese. We also do a lot of “recycling” of ourselves already. For instance, the use of our own sewage to fertilize crops. The practice has been called “biosolids” since the 1990s to make the idea more – ahem – palatable to the public.

Since some people will not accept the human-derived milk protein, they are also creating “good ol’ fashioned” cow protein-derived vegan cheese – imagine that…

Since the group is working closely with the FDA on legal guidelines, it is very likely their project will come to fruition – it’s just a matter of when. It’s still “a work in progress.”