Could a Davis-Besse nuclear power plant that has been shut down before for non-radioactive leaks be the cause of cancer in portions of the northwest Ohio, including Toledo.

The reactor has been plagued with accidents and violations, starting even before it began operations.

Since November 2011, EPA has assessed 14 former dump sites, previously identified by state agencies, as part of an investigation into potential sources of contamination in eastern Sandusky County, Ohio.

Ohio health and environmental regulators have speculated the cause was environmental and may have come and gone — maybe a chemical from a factory or a dump that polluted the air or water.

Air and water samples have not revealed any concerns around the Whirlpool plant or the Vickery Environmental waste site just outside town, where hazardous chemicals are injected into rock a half-mile below ground.

And in September, investigators said they found no radiation from homes, schools, or industries to link to the illnesses, ruling out the Davis-Besse nuclear plant, about 20 miles from Clyde, and NASA’s former nuclear reactor near Sandusky as a possible source.

First In Operation In Ohio

Davis-Besse thus became the first atomic power plant to go into operation in Ohio, one of 67 operational plants in the United States.

The mighty atomic reactor at the Davis-Besse Nuclear Power Station was brought to life at 5:29 p.m. Friday August 12, 1977.

At that precise moment engineers and physicists, huddled in the control room at the $540 million facility, completed a careful series of adjustments that permitted the start of the first self-sustaining nuclear chain reaction in Davis-Besse’s atomic furnace-it’s nuclear reactor.

In physicists’ jargon, the reactor “went critical” as billions of atoms of uranium fissioned or split each second. This initial atom-busting liberated a quantity of neutrons suffient to split other uranium atoms in a fashion that will continue unaided, until intentionally halted.

Every time an atom of uranium-235 splits or fissions inside the reactor core, it releases two or three atomic particles called neutrons. These neutrons cause a chain reaction by smashing into other atoms of U-235, causing them to release neutrons. When the production of neutrons reaches a certain level, the fission reaction becomes self-sustaining.

It doesn’t take an accident for a nuclear power plant to release radioactivity into our air, water and soil. All it takes is the plant’s everyday routine operation, and federal regulations permit these radioactive releases. What you are not supposed to know:

A 100-mile radius from nuclear power plants and nuclear weapons labs as the location of 2/3 of all breast cancer deaths in the United States from 1985-89. 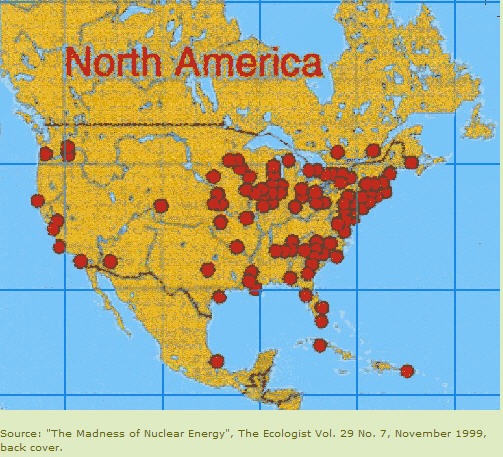 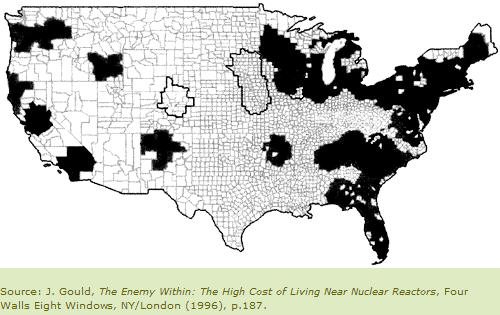 According to NETC, the average CPM for Toledo, Ohio is ABOVE NORMAL levels. 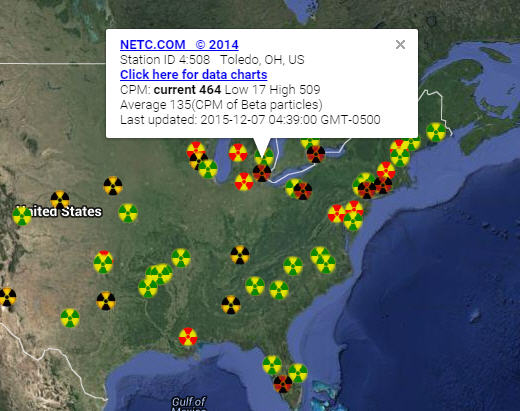 The monitoring system, known as RadNet, is the nation’s comprehensive network for monitoring radioactivity and ionizing radiation, according to the U.S. Environmental Protection Agency (EPA). 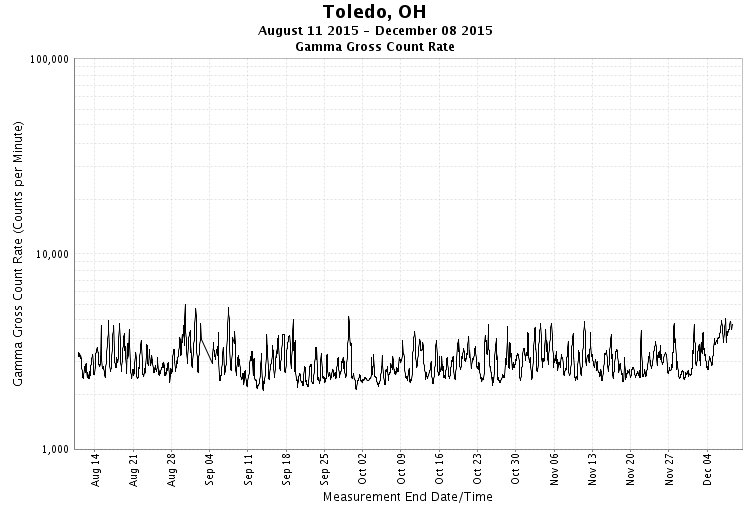 HUMAN EXPOSURE: Exposure to barium can occur through the air, water or food. Another source of barium is nuclear fallout.

For fission of uranium-235, the predominant radioactive fission products include isotopes of iodine, caesium, strontium, xenon and barium.

In the case of a release of radioactivity from a power reactor or used fuel, only some elements are released; as a result, the isotopic signature of the radioactivity is very different from an open air nuclear detonation, where all the fission products are dispersed.

People are in and around Toledo going about their daily affairs would be completely unaware of the sudden surge of radiation. 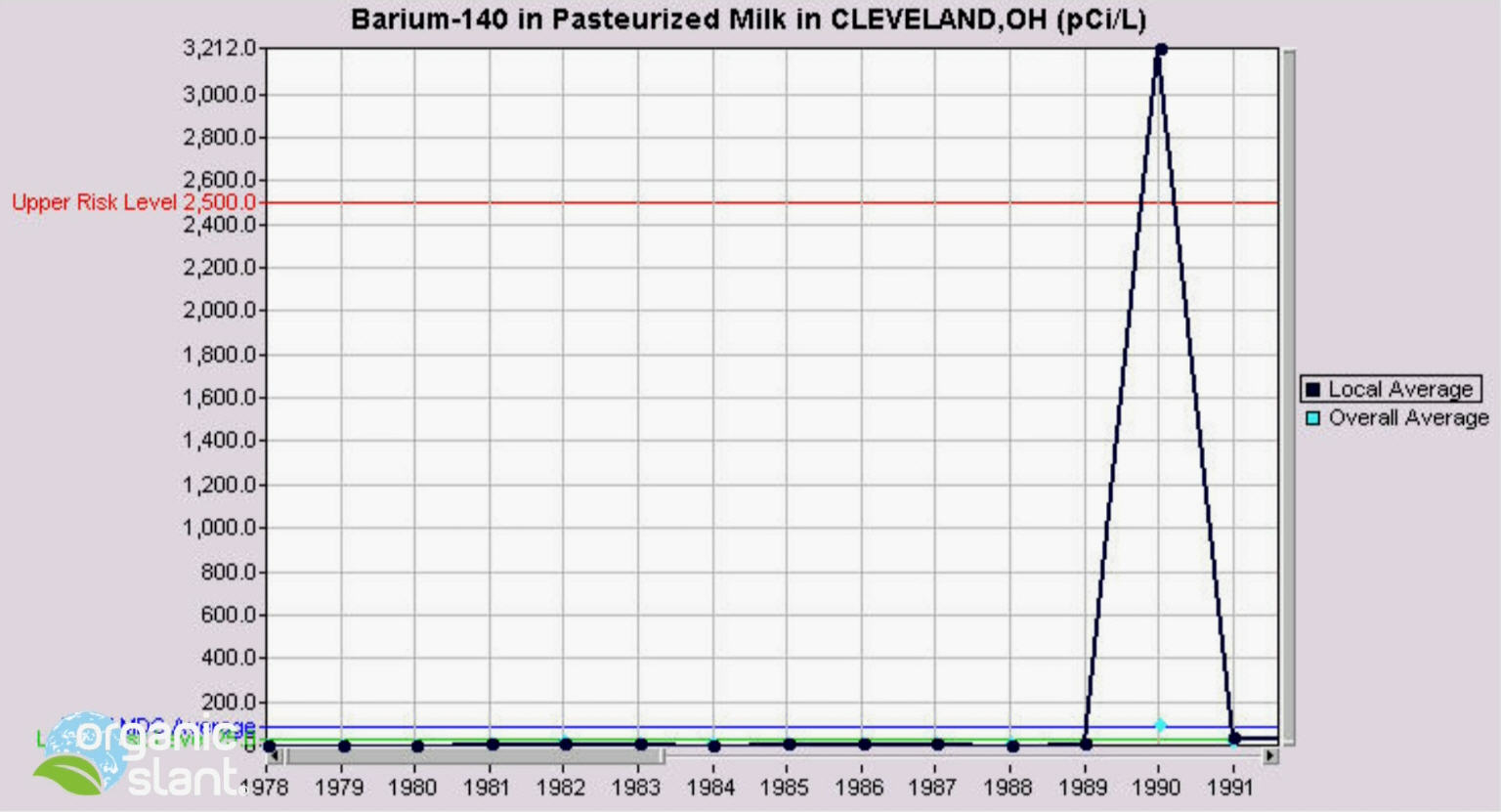 What happened in Cleveland, Ohio

On January 26, 2012, Beyond Nuclear filed a Freedom of Information Act (FOIA) request to the U.S. Nuclear Regulatory Commission (NRC) after NRC Region 3 Acting Administrator, Cynthia Pedersen, refused to provide documents about her decision to approve the rushed re-start at Davis-Besse, despite “unique” cracking of its concrete containment shield building.

In mid-June, 2012, NRC at long last began to respond to the FOIA request (the response is still not complete). Following are links to NRC’s FOIA response, APPENDIX B: (PREVIOUSLY UN-RELEASED) RECORDS BEING RELEASED IN THEIR ENTIRETY documents, cited in Beyond Nuclear and environmental coalition allies’ 5th supplement to its cracked concrete containment contention, in opposition to Davis-Besse’s 20 year license extension, before NRC’s Atomic Safety (sic) and Licensing Board (ASLB):

In a surprise revelation to the NRC’s Advisory Committee on Reactor Safety in September, 2015, First Energy admitted under questioning that they plan to submit a License Amendment Request (LAR) to keep the reactor running with a shield building that falls outside of structural design criteria. The coalition of intervenors has vowed to oppose an LAR, which should have been submitted when First Energy first revealed the building cracking in 2011.

The Nuclear Regulatory Commission on Tuesday renewed the operating license of the Davis-Besse nuclear reactor near Toledo for another 20 years.
Tweets about Davis-Besse Nuclear

A Toledo-area teen is getting national attention for her battle with cancer and her fighting spirit. 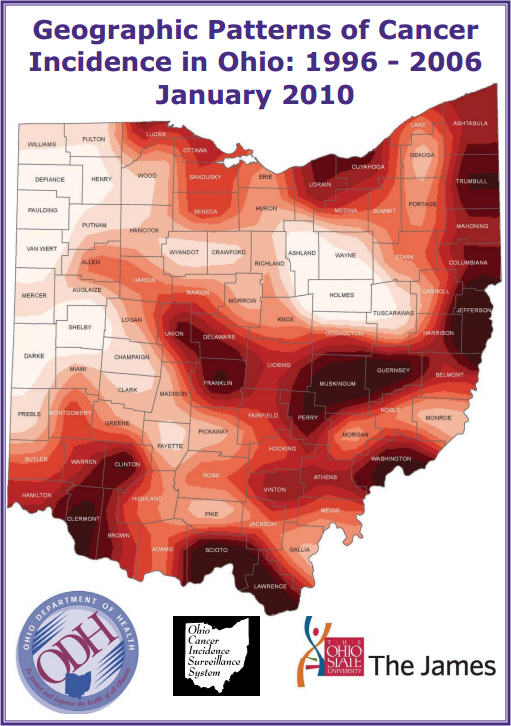