You are here: Home / Monsanto / Genetically engineered crops, glyphosate and the deterioration of health in the United States of America

Is rising glyphosate use responsible for increases in modern diseases? Claire Robinson looks at the latest study to raise the question

Is the rise in glyphosate use since the advent of GM crops responsible for the rapid deterioration of health in the US in the last 20 years?

A new study by former US Navy scientist Dr Nancy Swanson and co-authors asks this question. The study charts the huge increase in 22 chronic diseases in the US over the last 20 years and plots it against the rise in the use of glyphosate and the percentage of GM corn and soy plantings.

The correlations, portrayed graphically in super-clear charts, are striking. There’s a highly significant correlation between glyphosate use and the incidence of many of the diseases, including hypertension, stroke, diabetes, obesity, thyroid and liver cancer, kidney disease, and Alzheimer’s. There’s also a highly significant correlation between the percentage of GM corn and soy planted in the US and a similar list of diseases. And the increases in these diseases are not due to people living longer, which the authors adjusted for in most cases. 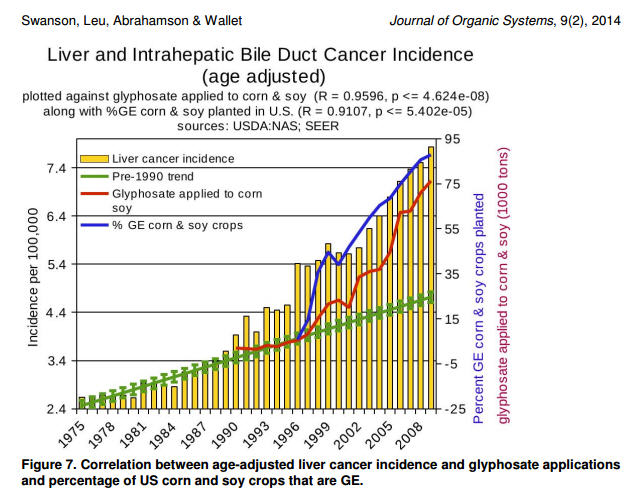 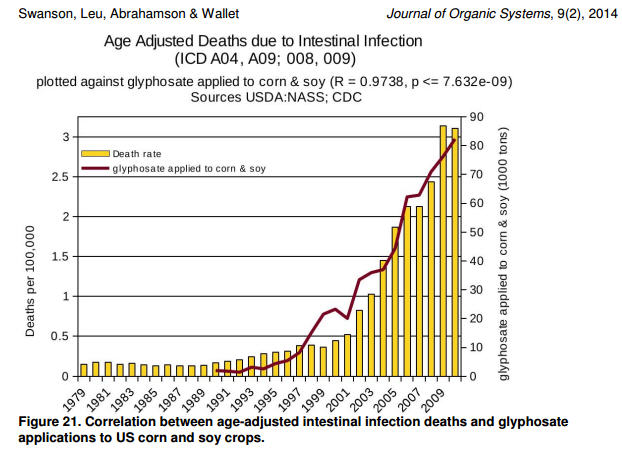 Does this mean that glyphosate causes these diseases? No – not necessarily. As the authors themselves note, correlation is not causation. The authors do, however, argue that given the known biological effects of glyphosate herbicides, “it would be imprudent not to consider causation as a plausible explanation”.

And while there are thousands of toxic substances and pathogens that could have contributed to the exponential rise in these diseases, the authors state, “No toxic substance has increased in ubiquity in the last 20 years as glyphosate has.”

It’s difficult to argue with this interpretation. And as a scientist unconnected with Dr Swanson and her co-authors told GMWatch, if the issue of GM crops and their associated pesticides were not such a political and economic ‘hot potato’, such a rapid escalation in disease in a population would be investigated as an emergency priority. That may be especially true if the disease in question were caused by bacteria or viruses, where there is massive corporate interest in developing vaccines and anti-bacterial products. In the case of non-infectious diseases, however, where possible culprits may include widely used and consumed GMOs and pesticides, US regulators turn their backs and pretend nothing is happening.

What is required scientifically in order to establish causation? The answer: long-term controlled animal feeding studies performed with the complete glyphosate herbicide formulations as sold to farmers and the public, using realistic doses that you and I could be exposed to and that are currently claimed to be safe. As far as I know, only one study that meets all these criteria has been carried out: Seralini’s study on NK603 maize and the Roundup herbicide it’s engineered to tolerate. The results were clear: doses of Roundup at only half the level allowed in EU tap water were found to cause severe liver and kidney damage and hormonal disturbances.

Arguments against such studies on animal welfare grounds do not hold water. If it is cruel to subject a few hundred or thousand lab rats to environmentally realistic doses of Roundup, it is far more cruel to subject millions of people and animals to these same doses in an uncontrolled experiment where no one is looking at the results and no regulatory action will be taken.

Should we sit back and do nothing until the necessary animal feeding studies can be funded and carried out, and then wait some more time for the regulators to take action? No. It makes sense to minimise our exposure to Roundup and other agrochemicals right now. That means eating organic, filtering our water, avoiding the use of pesticides in our gardens and fields, pressuring local authorities to restrict their use in school grounds and parks and on our roads and pavements, and lobbying for school and hospital meals programs to serve organic and non-GMO food. And if you’re living somewhere other than North and South America, it means doing everything you can to keep herbicide-tolerant GM crops out of your country.

Meanwhile, Dr Swanson’s study (abstract below) provides excellent ammunition against the GMO promoters’ argument that “trillions of GM meals” have been eaten in the US and that Americans are fine. Clearly, they are nothing of the sort. 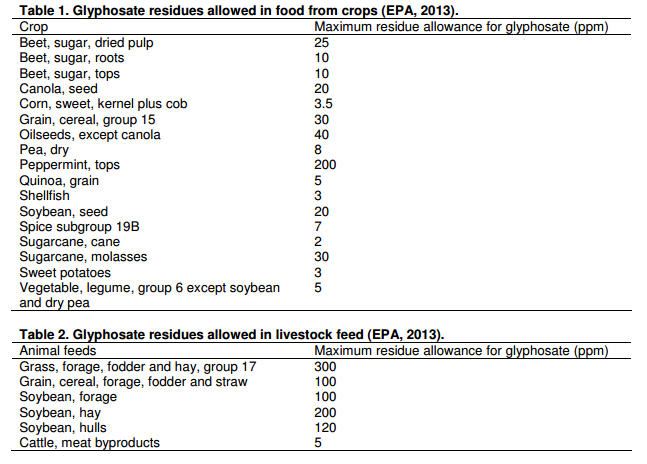 Genetically engineered crops, glyphosate, and the deterioration of health in the United States of America

A huge increase in the incidence and prevalence of chronic diseases has been reported in the United States (US) over the last 20 years. Similar increases have been seen globally. The herbicide glyphosate was introduced in 1974 and its use is accelerating with the advent of herbicide-tolerant genetically engineered (GE) crops. Evidence is mounting that glyphosate interferes with many metabolic processes in plants and animals and glyphosate residues have been detected in both. Glyphosate disrupts the endocrine system and the balance of gut bacteria, it damages DNA and is a driver of mutations that lead to cancer.