You are here: Home / Fukushima / Fukushima Radiation Detected Off All U.S West Coast States In 2015

Fukushima nuclear waste is now being found off all U.S. states on West Coast. The radiation was detected near the shorelines of California, Oregon, Washington, and Alaska this summer.

The highest radiation was just miles from San Francisco. Click on the map below for a link to check the test results.

The release of radioactive contaminants from Fukushima remains an unprecedented event for the people of Japan and the Pacific Ocean.

In the aftermath of the 2011 tsunami off Japan, the Fukushima Dai-ichi Nuclear Power Plant released cesium-134 and other radioactive elements into the ocean at unprecedented levels. Since then, the radioactive plume has traveled west across the Pacific. Any cesium-134 detected in the ocean today must have come from Fukushima. Samples from the surface waters of the western Pacific that have not been contaminated by the Fukushima source were expected to have 137Cs activity of between 1 and 2 Bq/m3 and for 134Cs to be “below detection.

In October 2014 the Woods Hole Oceanographic Institution reported that radiation from the Fukushima nuclear disaster was approaching the West Coast. A sample taken Aug. 2 about 1,200 kilometers west of Vancouver, B.C. tested positive for Cesium 134, the “fingerprint” of Fukushima. It also showed higher-than-background levels of Cesium 137, another Fukushima isotope that already is present in the world’s oceans from nuclear testing in the 1950s and 1960s. The sample is the first of about 40 offshore test results that will be made public at a conference on November 13, 2014.

Even the organization behind the tests believe Fukushima presents little risk to our health. #DOWNPLAY

The ocean contains many small sources of naturally occurring radiation that in most places exceeds the dose provided by radioisotopes released from Fukushima. In addition, the remnants of nuclear weapons testing in the 1960s and 70s are also still detectable around the world. Except for locations on land in Japan and sites near the Fukushima Dai-ichi nuclear power plant, all of these sources combined pose little risk to human health. Woods Hole Oceanographic Institution

They still refer to the release as WAS not STILL RELEASING.

By comparing the amount of cesium-137, which has a relatively long 30-year half life, and cesium-134, which has a much shorter, 2-year half life, we can “fingerprint” the contamination from Fukushima and estimate how much was released into the Pacific. Woods Hole Oceanographic Institution

At their highest near the damaged nuclear power plant in 2011, radioactivity levels peaked at more than 10 million times the levels recently detected near North America.

Tons of contaminated water has entered the environments of the pacific basin that will most certainly effect the food chain all the way up to the fish we consume.

No state or federal agency is testing Pacific waters for radiation from the crippled Japanese nuclear plant. 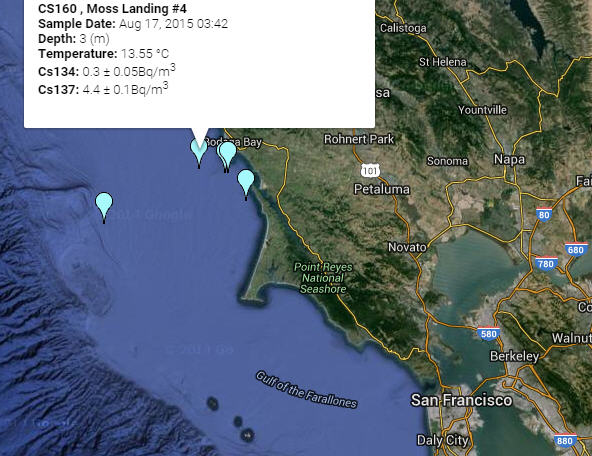