In 2010, October was declared Non-GMO Awareness Month by the Non-GMO Project, and this year, from October 1st through October 16, protesters will march through several cities across the northeast, stopping at key points along the way to hold local rallies with guest speakers. Their goal? To convince the U.S. government to listen to the strong majority of Americans – 89% according to recent New York Times poll – who want foods that contain genetically modified ingredients labeled.

But the truth is, genetically modified foods have NOT been tested in long-term clinical studies on humans. And GM plants do produce substances not contained in the original, non-GMO plants. Some GM crops, like Bt corn, have been engineered to produce insect-killing pesticides inside the plant. Though Bt, a natural pesticide derived from the bacteria Bacillus thuringiensis, has long been considered safe for humans when applied to the outside of crops (where it can presumably be washed off), scientists have not studied the long term effects of eating genetically modified corn with Bt proteins on the inside.

So the other day, working in the garden, I came across an Amaranthus plant that seems to have my same sentiment to GMOs. It looks as if the plant is giving the middle finger. You can fill in the rest, but abbreviated it spells: F.U. G.M.O.

October is Non-GMO Month! How will you celebrate? I’m with the Amaranthus, I will be celebrating it by flipping my phalange to GMOs. F.U. G.M.O.! 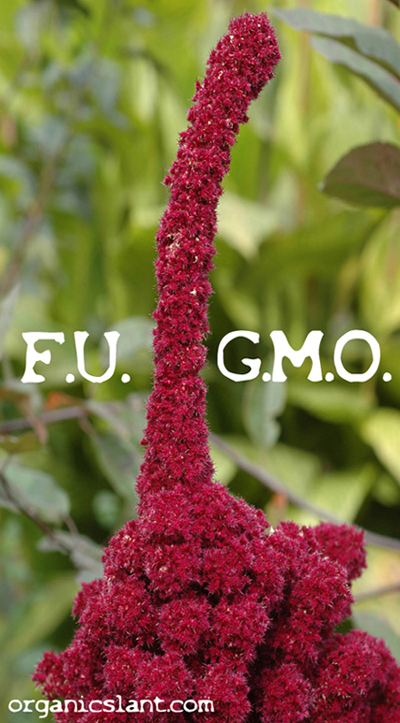