You are here: Home / Archives for NPP 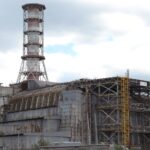 Scientists monitoring the Chernobyl nuclear power plant in northern Ukraine are detecting increased fission reactions inside an inaccessible chamber built around the radioactive ruins of a reactor that suffered a catastrophic meltdown in 1986—and they aren’t sure why. New Scientist reported this week that since 2016, researchers have detected a 40% surge in neutron emissions from a sealed […]