You are here: Home / GMO's / SEED: The Untold Story

Few things on Earth are as miraculous and vital as seeds. Worshipped and treasured since the dawn of humankind, these subtle flecks of life are the source of all existence. Like tiny time capsules, they contain the songs, sustenance, memories, and medicines of entire cultures. They feed us, clothe us, and provide the raw materials for our everyday lives. In a very real sense, they are life itself.

Yet in our modern world, these precious gifts of nature are in grave danger. In less than a century of industrial agriculture, our once abundant seed diversity—painstakingly created by ancient farmers and gardeners over countless millennia—has been drastically winnowed down to a handful of mass-produced varieties. Under the spell of industrial “progress” and a lust for profit, our quaint family farmsteads have given way to mechanized agribusinesses sowing genetically identical crops on a monstrous scale. Recent news headlines suggest that Irish history may already be repeating in our globalized food system. Articles in the New York Times and other mainstream sources report the impending collapse of the world’s supplies of bananas, oranges, coffee and coconuts—all due to a shortsighted over-reliance on a single, fragile variety. Without seed diversity, crop diseases rise and empires fall.

More than a cautionary tale of “man against nature,” the remarkable story of seeds is an epic “good-versus-evil” saga playing out in our modern lives. For eons, cultures around the world have believed seeds to be our birthright: a covenant with the earth shared by all and passed down across generations. But today, our seeds are increasingly private property held in corporate hands. A cadre of ten agrichemical companies (including Syngenta, Bayer, and Monsanto) now controls more than two-thirds of the global seed market, reaping unprecedented profits. Genetically modified crops (GMOs) engineered in their sterile laboratories dominate farmers’ fields and dinner tables in the United States and countries around the world.

Farmers from Minnesota to Madhya Pradesh, India toil in economic thrall to the “Gene Giants,” paying hefty licensing fees to plant their patented crops. If they attempt to save their own seed at the end of a season, following a tradition practiced by humans for over 12,000 years, they face ruthless prosecution. (Suffering under this indentured servitude, over 250,000 farmers in India have committed suicide in the last 20 years.)

People everywhere are waking up to the vital importance of seeds for our future. In recent months, March Against Monsanto protests have rallied millions in more than 400 cities and 50 countries to the cause of seed freedom. Ballot initiatives to label genetically modified foods have been proposed in U.S. cities from California to Connecticut—a direct threat to the profits of the Gene Giants and their Big Food cronies. Seed libraries, community gardens, and a new generation of passionate young farmers are cropping up to shift the balance toward a more sustainable and sovereign seed paradigm. A David and Goliath battle is underway, and the stakes couldn’t be higher.

The story of our seeds is a defining story of our time. Caught between the runaway juggernaut of industrial agriculture and the ecological, cultural, and spiritual destruction in its wake, seeds offer us a profound chance to restore mutual harmony between people and planet. They are the eternal promise of an abundant new world waiting to be born. But the time for this redemption is running out. In telling this story, we aim to bring into clear focus the beauty, hope, and magic that seeds represent for humanity at this critical juncture.

BRING SEED TO A THEATRE NEAR YOU…

TRYING TO PURCHASE TICKETS TO A SCREENING NEAR YOU?

Search for your city or zip code on map to see the screenings in your area. Click on the map link for the screening you want to attend and reserve your tickets today. 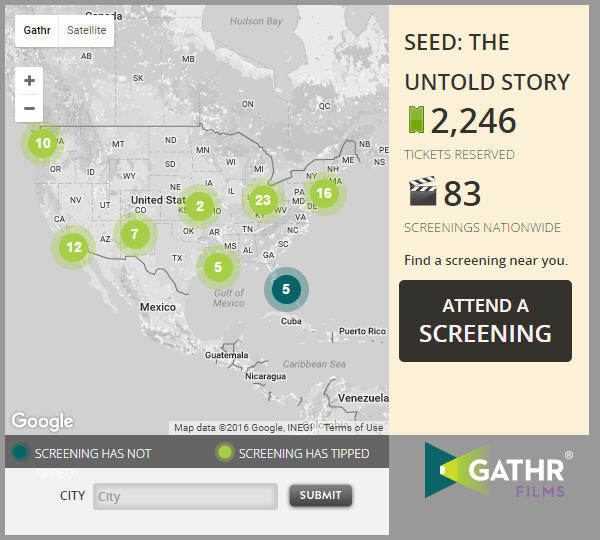 REMEMBER: With Theatrical On Demand® we can bring this powerful film wherever and whenever the demand exists. But to do this, SEED: The Untold Story will come to your city only if enough tickets are sold in advance. This means you can’t wait till the night of the showing to get your tickets—you have to get your tickets now if you want this film to come to your town.