You are here: Home / Nuclear / Nuclear Waste Has Been Used For Decades To Make Our Food “Safer”

The FDA presently supports and actively promotes the use of cobalt-60 culled from nuclear reactors as a form of “electronic pasteurization” on all domestically produced conventional food. They claim it makes the food “safer”.

Food irradiation (the application of ionizing radiation to food) is a technology that improves the safety and extends the shelf life of foods by reducing or eliminating microorganisms and insects. Like pasteurizing milk and canning fruits and vegetables, irradiation can make food safer for the consumer.

How Is Food Irradiated?

There are three sources of radiation approved for use on foods.

Irradiation can serve many purposes.

What Foods Have Been Approved for Irradiation?

FDA has approved a variety of foods for irradiation in the United States including:

Inconceivably High Amounts of Radiation Used To “Pasteurize” Your Food

STATUS OF FOOD IRRADIATION REGULATIONS IN THE US

How Will I Know if My Food Has Been Irradiated?

FDA requires that irradiated foods bear the international symbol for irradiation. Look for the Radura symbol along with the statement “Treated with radiation” or “Treated by irradiation” on the food label. Bulk foods, such as fruits and vegetables, are required to be individually labeled or to have a label next to the sale container. FDA does not require that individual ingredients in multi-ingredient foods (e.g., spices) be labeled.

It is important to remember that irradiation is not a replacement for proper food-handling practices by producers, processors and consumers. Irradiated foods need to be stored, handled and cooked in the same way as non-irradiated foods, because they could still become contaminated with disease-causing organisms after irradiation if the rules of basic food safety are not followed.

USDA works with FDA to promote food irradiation where it is appropriate. USDA also controls the use of the word “organic” on food labels. Foods which have been irradiated, no matter how they are grown or produced, cannot be labeled as USDA certified organic. 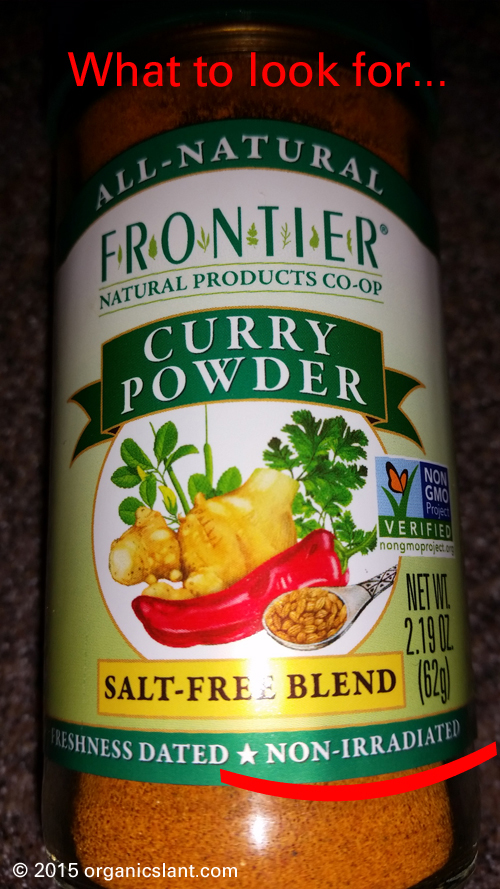