You are here: Home / Archives for sky 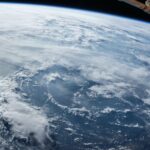 An astonishing number of viruses are circulating around the Earth’s atmosphere — and falling from it — according to new research from scientists in Canada, Spain and the U.S. The study marks the first time scientists have quantified the viruses being swept up from the Earth’s surface into the free troposphere, that layer of atmosphere […]