Very high levels of radioactive cesium, believed to be from Japan’s tsunami-nuclear disaster last March, have been found by independent researchers in the city of Fukushima, nearly 40 miles from the crippled reactors.

The 307,000 becquerels of cesium per kilogram found well outside the current evacuation zone is three times the benchmark established by the government, which requires the contaminated soil to be sealed in concrete. Kobe University professor Tomoya Yamauchi and colleagues examined soil samples collected on September 14 at five locations in the city.

Yamauchi says the entire area is so contaminated that it would be necessary to remove all topsoil, as well as road surfaces, asphalts, roofs and concrete walls, to protect the population. Local activists are calling on the government to declare the Fukushima city district a hotspot, where residents are urged to evacuate and would be eligible for state assistance should they decide to go.

The Chernobyl disaster resulted in the creation of a 30km exclusion zone, and cities have been deserted and left to be reclaimed by nature. It was the worst nuclear accident in the world – that is, until the Japanese tsunami struck Fukushima. According to the Japanese government, the accident has unleashed 168 Hiroshima bombs’ worth of radioactive material, making the area around Fukushima more dangerous than safety standards set for the areas around Chernobyl.

The Japanese government released a map that shows the badly affected 34 locales surrounding Fukushima. Radiation measurements conducted by the Ministry of Education, Culture, Sports, Science and Technology found deadly levels of cesium-137, which were in excess of 1.48 million becquerels per square meter. This substance is so dangerous that it has rendered these areas completely uninhabitable.

1.48 million becquerels is a crucial amount, as it was the threshold for mandatory evacuation after the Chernobyl disaster. After Japan’s tsunami and nuclear crisis, this level of radiation was found in the municipalities of Okuma, Minamisoma, Tomioka, Futaba, Namie, and Iitate, making it impossible for any civilians to live there. Of course, radiation levels are highest around Fukushima, which has been deserted since the disaster. As a result, Fukushima’s radioactive contamination is worse than Chernobyl’s.

Considering that the area around Chernobyl has been deserted since 1986, we can expect to see Fukushima quarantined for even longer. 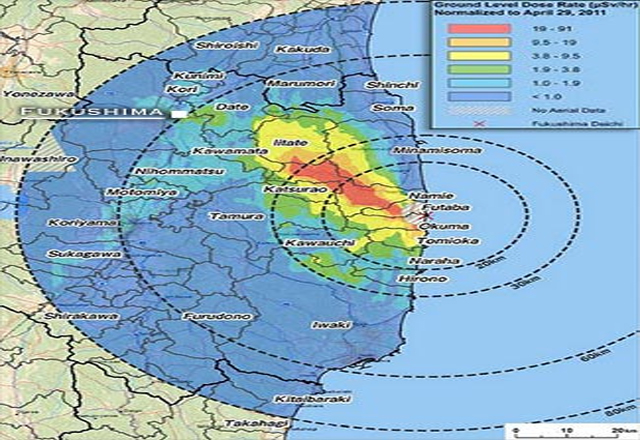 Initial radiation estimates showed the greatest contamination spread to the northwest of the Fukushima nuclear power plant, located on the tsunami-hit coast. High levels are now believed to have spread further than this graphic indicates.