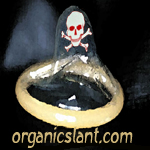 (Organic Slant) There are many factors to be considered when deciding on a spermicide including potential side effects, health risks and which form of spermicide will work best with your preferred method of contraceptive barrier.

Spermicide is a substance used for contraceptive that kills sperm.  In order to prevent pregnancy effectively, spermicide should be inserted into the the vagina before sexual intercourse.

Nonoxynol-9 (N-9) is the most common active ingredient in spermicide.  Spermicides which contain N-9 come in many forms such as gels, films and foams.  Nonosynol-9 is an organic compound that is used as a surfactant and is a member of nonoxynol family of nonionic surfactants.  Cleaning and cosmetic products often contain N-9 and related compounds.  Because it has been known to cause genital lesions, the use of N-9 is often controversial.

As a spermicide, it attacks the acrosomal membranes of the sperm, causing the sperm to be immobilized.

Although generally uncommon, Nonoxynol-9 has been associated with a number of possible side effects such as irritation, itching or burning of the sex organs in either partner.  Women may also experience urinary tract infections, yeast infections and bacterial vaginosis after using N-9.  Because these side effects are so infrequent, few women stop using N-9 once they’ve tried it.

In 2000, researchers demonstrated conclusively that Nonoxynol-9 (N-9) was not effective in reducing HIV risk.  N-9 products are sold over the counter as contraceptive spermicides, not for the prevention of HIV or other infections. Since N-9 kills HIV in a test tube, research was undertaken in the 1980s and 90s to see if these products would also work for HIV prevention.

The 2000 study data showed that a 52.5 mg. N-9 gel (the lowest dose product on the market) did not protect women from HIV infection.  In fact, when used more than once a day, N-9 contraceptive products may actually increase HIV risk slightly by irritating the vaginal membranes and causing disruptions that make it easier for the virus to enter the blood stream.  Other studies show that N-9 is even more irritating to rectal tissue than to vaginal tissue.

A severe allergic reaction can result in difficulty breathing or a sudden and extreme drop in blood pressure, known as anaphylactic shock. This condition is life-threatening and requires immediate medical attention.

Although everyone is urged to use condoms, it’s actually not safe for some people to use them, especially the latex ones. Aside from skin problems like rashes, blotches and sometimes a painful feeling due to the condom’s dryness, many people are allergic to latex condoms. It causes an itching feeling and a skin infection every time they use one. To some, it’s just a very mild thing, so mild that they don’t even really feel the irritation, but some people have severe allergic reactions that calls for immediate medical attention.

Although condoms do go through a strict quality assurance test and are regulated to pass strict compliance, this doesn’t mean that they don’t contain chemicals and substances that could trigger an allergic reaction. Most people are not even aware of their latex allergies and continually use latex condoms. This could cause possible long term side effects and might even damage the reproductive system.  Latex allergies are riskier amongst women since the symptoms are not easily seen.

Although latex is the most common material being used in condoms, there are substitutes such as organic condoms and natural rubber condoms which you can buy in most pharmacies and drug stores. The styles and price ranges do vary, depending on what type and brand of condom you get, but it’s better to be safe than sorry. Some condom manufacturers have also created a hypoallergenic type of condom which works well as a substitute, but you might want to ask your skin doctor about it first.